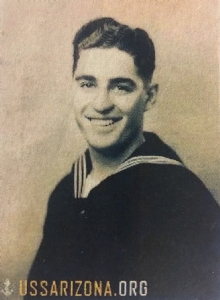 On Sunday, December 7, 1941, Japanese carrier-based aircraft launched a surprise attack on the U.S. Navy base and ships at Pearl Harbor, Hawaii. During the attack, the Pennsylvania-class battleship USS Arizona (BB-39) was struck by eight armor-piercing bombs. One penetrated the Arizona's deck near its No. 2 turret, causing a large explosion that destroyed the forward half of the ship and started a fire that burned for two days. It is thought that most of the Arizona’s crew members died instantly during the explosion. More than 1,100 sailors and Marines were lost along with the ship.

Seaman First Class Samuel A. Abercrombie was born March 18, 1919 in Legget, Texas and entered the U.S. Navy from Houston, Texas on 14 October 1940.  S1c Abercrombie was aboard the Arizona on the day of the Pearl Harbor attack and was among the men lost with the ship. His remains were not recovered. Today, Seaman First Class Abercrombie is memorialized on the Courts of the Missing at the National Memorial Cemetery of the Pacific.

Based on all information available, DPAA assessed the individual's case to be in the analytical category of Non-recoverable